As a member to the Consortium of Humanities Centers and Institutes (CHCI), RIH has joined in the international project “Religion, Secularism, and Political Belonging” (RelSec) of the consortium, as supported by the A.W. Mellon Foundation of US.

RelSec is led by four centres located in North America (The University of Arizona; formerly at Portland State University), Europe (University of Utrecht), the Middle East (Tel Aviv University), and China (The Chinese University of Hong Kong) respectively. It is a 3-year pilot program (from January 2012 to December 2015, further separated into 4 periods) with a total budget of US$70k for our Institute. It will investigate how religious and secular formations organize the practices of political belonging across the globe. The initiative will take a comparative approach to its topic by utilizing the international scale of the CHCI network. It will also employ the distinct interdisciplinary strengths of its participating centres by involving scholars from across the fields of literature, history, religious studies, philosophy, law and politics, anthropology, and critical race and gender studies.

RIH also joined the new CHCI Mellon Project of “Medical Humanities” together with the University of Northern Carolina, Columbia University, University of Western Cape, University of Washington, and Dartmouth University in the US and King’s College London in UK. It is also a 3-year pilot program (from January 2013 to December 2016, further separated into 4 periods) with a total budget of US$75k for our Institute. The term “Medical Humanities” refers to a wide field of research and pedagogical initiatives. It is emerged as a response to the lack of humanities elements, which are understood and practiced in different societies and cultures, in medical education.

With the established Health and Humanities Initiative in CUHK, RIH would focus the issue of “aging” and history of health perspective will remain the strength of our research interest. Our project will deliberate on how medical or health related issues may have embedded in concept and practice in the historical context that continues to bear upon contemporary situations as a widely inherited tradition.

To commemorate the eleventh anniversary of the International Buddhist Progress Society (IBPS) of Hong Kong, the Research Institute for the Humanities, together with the Centre for the Study of Humanistic Buddhism (CSHB), CUHK, will jointly organize a series of events that aims to introduce Humanistic Buddhism to a wider global audience. The present proposal describes a three-year scheme (Fall 2011 to Spring 2014) with an annual budget of half-a-million Hong Kong dollars.

What is ‘Humanistic Buddhism’ ?

Humanistic Buddhism is an amalgam of eight schools of Chinese Buddhism that aims to make Buddhism relevant in the modern world; it focuses on worldly issues instead of leaving the world behind, caring for the living rather than the dead, aspiring for universal salvation rather than self cultivation. It is characterized by humanism, an emphasis on daily life, altruism, joyfulness, timeliness and universality.

The Humanistic Buddhism series is poised to continue CUHK’s leadership in bringing the wisdom of top academics before an enthusiastic public. The present proposal calls for two public lectures to be delivered each year, and each lectures will be presented three times, at the Hong Kong Central Library, at the CUHK, and at the Fo Guang Vihara (Foguang daochang 佛光道場) in Kowloon Bay. The lectures aim at informing the public about the history and philosophy of Buddhism: its origin, evolution and adaptation in different times and locales, the rise of Humanistic Buddhism in the twentieth century, the essence of the faith and its relation with intellectual movements of the time. They are intended for the faithful as well as the skeptics, the enlightened as well as the secular, the literati as well as the curious; they are not to evangelize the religion, but to explicate its unique philosophy from a scholarly perspective. Each public lecture will be chaired by a moderator, a celebrated expert in his/her own right.

The proposed project aims to translate into Chinese outstanding English publications in Humanistic Buddhism. One notable example is the monograph Democracy’s Dharma: Religious Renaissance and Political Development in Taiwan, the most important contributions of Professor Richard Madsen to the Taiwan religious scene.

A series of studies that encompass cross-cultural religious comparison will be carried out by an international team of experts, who will present a global view of religious development from a historical and multidisciplinary perspective.

The Islamic Studies Initiative (ISI) was launched by the Research Institute for the Humanities (RIH) at CUHK on 13 September 2013 as a result of an agreement reached between the RIH and the Islamic Cultural Association (Hong Kong). The latter is to provide the financial resources needed for the enhancement of Islamic Studies in the university. The ISI represents the culmination by far of prolonged efforts on the part of CUHK to promote Islamic Studies. For some years, Islam-related courses have been offered by different departments in local universities. Some local scholars have also undertaken researches on Muslims in Hong Kong and mainland China. Seen from this perspective, the ISI represents a breakthrough in Hong Kong: it is the first attempt to establish Islamic Studies as a discipline in its own right in local higher education; it heralds a new phase of research in this discipline.

The ISI will organize a Distinguished Lectureship in Islamic Civilization as its landmark programme. The Director of the esteemed Oxford Centre for Islamic Studies, Prof. Farhan Ahmad Nizami, has accepted the ISI’s invitation to be the first Speaker of the program which will likely be held in Spring 2015. Prof. Nizami will deliver one research seminar and two public lectures. The occasion will be a valuable opportunity for local academics to meet and have exchanges with this renowned scholar of Islam. The ISI will be active in a variety of academic activities including hosting academic visits of international scholars, conducting research projects, producing publications and organizing lectures. It has planned for the publication of the first collection of papers on Islamic Studies which are generated from two conferences held in CUHK previously. The papers are focused on Islam in China and are written by scholars from various countries. 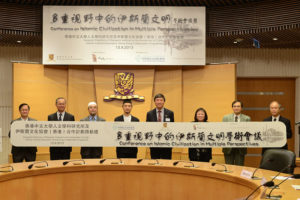 Amongst the wealth of Kunqu promotion projects in town, the Kunqu Research and Development Project to be organized by the Research Institute for the Humanities stands out with its clear and unswerving mission of focusing on Kunqu research as well as the revamp and revitalization of Kunqu play scripts and music.

Since Kunqu’s shot to fame after its being named one of the masterpieces of the Oral and Intangible Heritage of Humanity by UNESCO in 2001, the mainland’s Government has been helping to promulgate and popularise Kunqu through funding new plays – while leaving the classical plays, numbered well over 500 and of high literary and performance values, to fade in obscurity and oblivion.

The above activities have considerably raised the profile and awareness of Kunqu as a treasured cultural heritage. As a means to preserve Kunqu as an art form, City University of Hong Kong’s Chinese Civilization Centre has been promoting Kunqu not only through organising talks and Kunqu performance but by systematically recording and videotaping Kunqu performances by premier professional Kunqu artists.

These projects, while truly commendable, should be complemented by projects more sustainable in nature and carrying longer term visions. To help preserve and pass down to our future generations this highly sophisticated art form, it is important that we step back and engage instead in rudimentary ground works – the resurrection of disorganized play scripts in disarray and the systematic research of Kunqu as a literary and theatrical art form.

As the only University in Hong Kong taking pride in its Chinese humanities tradition, this is in line with CUHK’s missions and values to take on the challenge of studying and researching into Kunqu, one of the oldest art forms in China. The Project, after its inauguration, will be engaged in two major facets of work related to Kunqu:

Compilation and Editing of Kunqu Manuscripts

This will be realized through

As with all other western or Chinese theatrical art forms, Kunqu is a highly interdisciplinary one that encompasses music, literature, dance, physical movements, stage, props and costumes. To facilitate a thorough and comprehensive review of Kunqu, the Project will provide the platform for exchanges among Kunqu experts of diverse backgrounds and specialties.

These experts will be invited to CUHK as visiting scholars for up to two months. They will be housed at the Research Institute for the Humanities.

All these will complement beautifully with the one credit-course on Kunqu, masterminded by Professor Pai Hsien-yung and jointly managed by Professor Hua Wei, a Kunqu scholar from the Department of Chinese Language and Literature. The course will be launched starting from the academic year 2011-12.

“Focusing on Taiwan” and its introduction 「聚焦台灣」

As a continuation towards the former grant programme for Taiwan Studies, a new proposal entitled “Focusing on Taiwan: Health, Peace, Memory (2014-2017)” has been submitted and approved by Ministry of Education of Taiwan. Regarding this three year proposal, Taiwan Research Centre and Research Institute for Humanities have launched a distinguished lectureship, introducing Taiwan academic development through workshops, seminars and conferences.

This is a project entitled “Health, Humanities, and Historical Memory: Tung Wah Group of Hospitals in Comparative and Global Perspective”, This project is a part of the bilateral collaboration of the Research Institute for the Humanities (RIH) and Taiwan Research Centre (TWRC) at The Chinese University of Hong Kong (CUHK) and the College of Public Health at National Taiwan University (NTU-PH).

On 18–21 February 2016, Prof. Chen Wei J., Dean of NTU-PH and Prof. Chang Shu-sen led a group of postgraduate students from the NTU-PH to visit RIH at CUHK. This visit, entitled “Nurturing Life in Time”, aimed at strengthening the collaboration between the two institutes and the TWGH.

The aim of this project is to extend our current effort in the research in the related themes and to use it as a matching project to other related projects in the RIH. Currently, the RIH is granted the “Focusing on Taiwan: Health, Peace, Memory” project by the Ministry of Education of Taiwan and the “Medical Humanities” project by the A. Mellon Foundation (subcontracted by the Consortium of Humanities Centers and Institutes) of US. Therefore, the project on “Public Health, Humanities, and Historical Memory” was matched with these two projects to deepen our research in these selected themes.

From a fishing village to a colonial city, and then to a major economic center and one of the most populated and advanced metropolises in the world, Hong Kong has been encountering different stages of health problem in over a century of time. Through tracing back to its historical background and tradition, this project expounds the humanities tradition of public health like the TWGF of Hong Kong, with comparison to other areas like Taiwan.

Moreover, this project, by adopting a global perspective, also expands the horizon of its research from regional studies to internationally-recognized discipline. The research re-examines local and regional issues in a global framework so as to arrive at an insightful conclusion to the current studies.

Social media & sharing icons powered by UltimatelySocial
This site is registered on wpml.org as a development site.